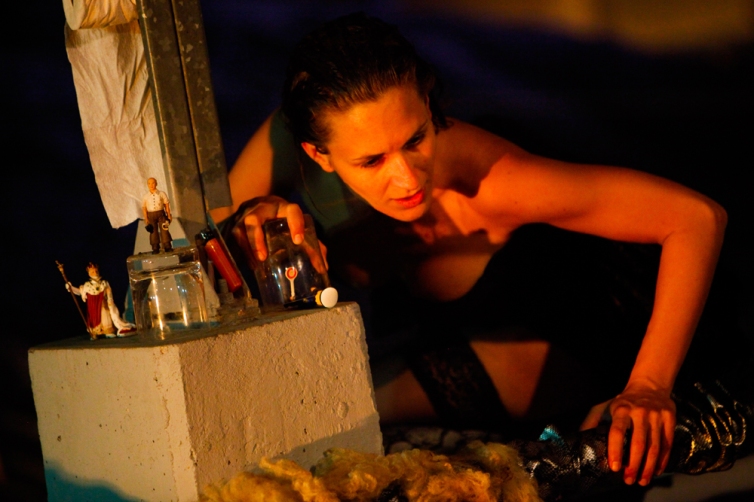 Polne sob s priprtih hodnikov is a complex project which combines different art disciplines, such as dance theatre, poetry, sculpturing and music – all being thoroughly intertwined with scholarly research work. The basic aim of the project was not only to make a dance performance, but also to create a more coherent field of practices. By having applied anthropological knowledge and methods to performative work, the performance gained a wider and socially more relevant content, as well as contextualization and communicability. At the same time, combining and mutually »translating« art disciplines into one another contributed to a more articulated artistic expression and a richer art piece in total.

The very performance was built from rich visuals images and scenes, which, together with the given atmosphere of the venue, created a feeling of sitting in a »magic garden«. Altogether it was a theatre of »inner worlds« – spaces and scapes, which reveal individual ways of living. By the help of imaginative power, the latter lead one to personal/spiritual survival in the world. In this sense, even solitude does not only present anxiety, but rather a pleasant state of peacefulness, in which the significance of life is regained.

The concept was primarily based on knowledge about marginality (marginalization), leading into personal or social isolation. The latter was embodied in three female characters, or better, through their professions and practices, being marked by different socially determined connotations and following social relations. In the frame of that, the main focus was put on reflexion of those relations on personal and spiritual level of each individual who

The idea of the performance however does not only lie in their stigmatization, since the focus is rather redirected to a view which reveals how much effort, will, joyfulness and playfulness must one invest into one’s own life in order to sustain the inner sparkle and glow. According to this, the performance (as well as the whole project) is dedicated to the questions of human coexistence, mutual respect, awareness of our own human »nature« and consequentially to the universal human characteristics (humanity).

Since the characters remain on their own tracks during almost the entire performance, the point of mutual empathy shines out only with the very last scene as a total juxtaposition and a round-up epilogue. Until that final ritual, where they look into each other’s eyes for the first time, they only present by-passing people to one another, leaving emptiness behind. This allows the spectator to read their relations to themselves and their practices first, however, only in that very last moment, when they finally see each other, an almost healing effect happens. In that crucial silent question »How does it feel for you to be in this world?«, there lies a key for them (us) to step out of their (our) closed selves – towards the other, openly and acceptingly.